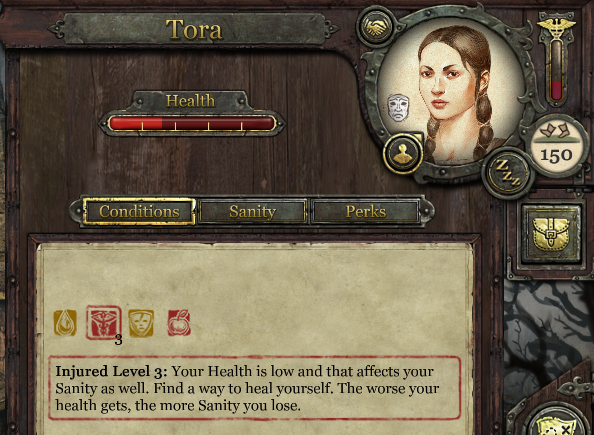 Conditions represent a wide variety of effects, which are applied to The Characters in Grimmwood. Since they can greatly influence the characters' abilities in almost every aspect of the game, it is crucial to properly and timely address them. Some can even be lethal, dehydration for example.

Unlike Traits, conditions are temporary - their effect can either appear/wear off as time progresses (e.g. hunger, thirst) or as a result of specific actions and events.

Though most conditions them represent some kind of ailment, some can have positive sides or be straight out beneficial for the characters. The color-coding serves as a basic guidance of that - green conditions are mainly positive, yellow - warning or having small negative effect and red ones represent more significant problems.

Conditions are listed in a drop down in the Avatar hub (upper right corner of the screen), as well as in the first tab of the Character screen.

These conditions are the direct result of the character's hunger and thirst. Both hunger and thirst are increased as time goes by, as well as when The Character spends Stamina in any action. Hunger, naturally, can be reduced by eating food and Thirst - by drinking water or herbal essences and tea.

These conditions are gained in relation to the Romance actions of The Character.

This condition is strictly related to the burden The Character carries and the maximal weight he/she can carry. Loaded characters can hardly outrun enemies and their Stamina cost for traveling is significantly increased.

Upon drinking some of the herbal essences/potions (Check Items), which can be found in the game, The_Character gains some primarily positive effects, which last until the end of the day (during the Night Phase). All of them have negative effects as well, but they are lesser.

These conditions are gained in various cases and all of them are negative.