In Grimmwood, each player gets a randomly generated character for each village he/she plays. 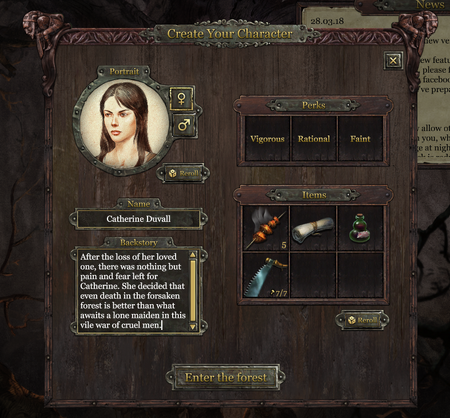 Before entering a village, the player is taken to the character creation screen, where some of the characteristics of The Character can be set. Once set, all of these, except the Items, remain permanent, while the character is alive, typically up to three weeks a game.

There are three types of statistics, that define the majority of the abilities and states of a character, listed below. Each of the statistics has a separate article for further clarification.

Note that Traits and Conditions are not considered as statistics, although they greatly affect the character.

Primary statistics change often in the game and those changes might have an immediate and dire effect.

Secondary statistics change even more often throughout the game than the primary, but their effect is lesser. Compared to Health and Sanity, it is much easier to restore good levels of your secondary statistics. These statistics are not shown to the player by numeric value or otherwise - the only indication comes from the conditions they cause.

Action related statistics are not indicated to the player in any way. They are just mentioned in the Traits / Conditions / Items, that affect them and in Actions, that require them.